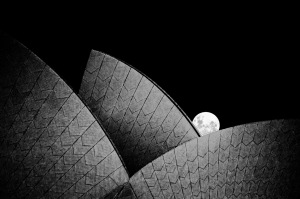 There is a lunar eclipse coming up this Saturday, and it will be visible from Australia. Click through to learn some fun facts about the moon like why the full moon always rises at sunset or why lunar eclipses always happen during full moon!

A total lunar eclipse will be visible from all across Australia this Saturday 4th of April 2015. For more details of this particular eclipse, including the viewing times, check out this post by IFLS. I will be going to Balmain, Sydney on Saturday for a Drink and Click event with fellow G+ photographers with hopes of capturing the full moon rising at sunset behind the Harbour Bridge (I’m putting in my prayers to the weather gods already! hehe). Come join us if you’re around! :)

When I decided I wanted to shoot the full moon behind the Opera House last year and realised it was rising at about sunset I thought it was a marvelous coincidence. However, I have since realised that it was not a coincidence… The full moon rises around sunset every month!!! So this really got me wondering…

In order to explain why this happens I am going to start with a simple explanation of the moon phases. In the diagram below you can see the different phases of the moon as it rotates around the Earth. One can see that at all times the sun is illuminating only half of the moon. However, depending on the angle of the moon with respect to the Earth we see the whole illuminated side of the moon, part of it, or none of it.

When the moon is in between the Earth and the sun the illuminated side is facing away from the Earth, hence we won’t see it. This is called a new moon. As the moon progresses along it’s orbit we will start to see a bit of the moon, and we will see a larger portion of the moon every day until moon reaches the furthest point of its orbit. In this position the moon is exactly opposite the sun, hence why we see a full moon. For more detail on the name of the moon phases click here.

From this we can see that in order for us to have a full moon, the sun, Earth and moon must be in a straight line (well, approximately straight, I’ll talk about eclipses further down). This is why a full moon rises at sunset, and sets at sunrise, because it must be in line with the sun! For similar reasons, a first quarter moon rises near noon, a third quarter moon near midnight, and a new moon near sunrise!! For more details on the time of moon rise throughout it’s cycle click here and here.

Here is a summary of the moon phases and what they look like both in the northern and the southern hemispheres.

Let’s talk about eclipses now. A lunar eclipse takes place when the sun, Earth and moon are perfectly lined up, such that the shadow of the Earth falls on the moon, obscuring it for a while (this is what will happen this Saturday). By looking at the initial phase diagram we can conclude that a lunar eclipse can only happen during full moon. 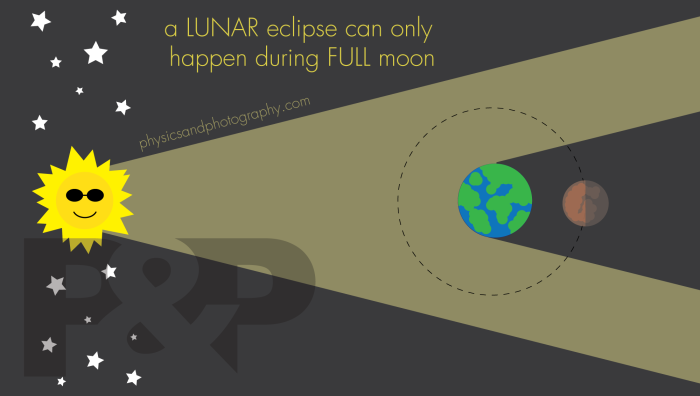 Similarly, a solar eclipse takes place when the sun, earth and moon are perfectly lined up, such that the shadow of the moon falls on the earth, obscuring the sun for a while. By looking at the initial phase diagram we can conclude that a solar eclipse can only happen during new moon.

If this is the case, then why do we not have lunar and solar eclipses every month with every full and new moons? As it is explained here, the orbits of the Earth and the moon are not exactly coplanar. The plane on which the Earth orbits around the sun is called the “ecliptic plane”. The orbital plane of the moon falls almost on the ecliptic plane but not quite. They form an angle of only 5 degrees (which I have exaggerated in the diagram for clarity). So, in order to have an eclipse we need not only the moon to be either full or new, but also for it to be on the ecliptic plane as well. Hence eclipses being a rarer occurrence.

Another thing I find fascinating about the moon is the fact that we always see the same side of the moon facing the Earth. Why is that? Well, it turns out that period of rotation of the moon around the Earth is exactly the same as the period of rotation of the moon around itself, around 30 days. This means that the moon is rotating around us at the same rate as it’s rotating around itself, hence the same side is always facing us! I wondered whether this was a coincidence or not and found this great explanation here. It turns out the moon used to spin much faster than it does now, but the effect of the gravitational influence of the Earth on the moon has caused it to slow down so that the same side is always facing the Earth, a phenomenon called tidal locking. I am constantly amazed by what physics can do! :) 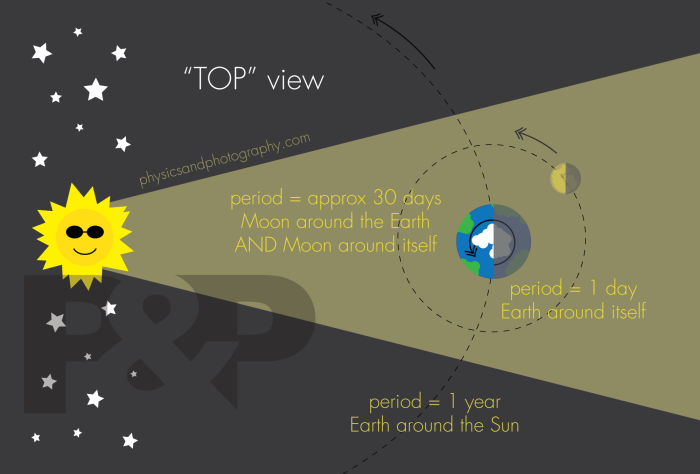 Note that I have illustrated the moon’s orbit as circular for simplicity, but it is actually elliptical. The physical implications of elliptical orbits will have to wait for another post! :)

I hope you have enjoyed these fun facts about the moon and I encourage you to go out and take pictures of it! It is harder than it seems because it is very very bright, much more than you would expect! Hence, it is hard to get a proper exposure both for the moon and the foreground, which is why I love full moon as it rises before sunset allowing the foreground to still be illuminated by the golden light.

Ps. If you liked this post you might like my post titled “Gravity”, where I explain why two very different objects dropped from the same height in vacuum will land at the same time, regardless of their mass and shape!